Participatory budgeting is a form of direct democracy where citizens actually have a say in how part of the city budget is allocated. The total public budget cannot easily be allocated based on local preferences only - any budgeting decision usually needs considerable amounts of data and analysis to actually uphold the commitments the city has made to the communities and services that depend on it. However, on the lower level of budgeting - allocating funds between several competing projects or funds earmarked for a specific purpose - there is a strong case to be made that decisionmakers actually do not possess the data needed to make most of the money they have at their disposal.

The same, of course, theoretically holds on the level of the budget as a whole, but the larger the budgetary changes and sums involved, the more data we will need and the slower the process of redirecting the funds will be. Therefore, if we want public budgeting to become more cost-effective and fact-based, we will benefit from a bottom-up approach, in which aggregating local data over long periods of time will slowly allow even larger decisions to be based on enough data to be effective.

In the spirit of crowdsourcing, data-gathering and prototyping new governance concepts, the Public Works Department together with the intrepid Joonas Pekkanen at our very own City Executive Office wanted to try out the idea in the Helsinki suburb of Kontula.

The Public Works Department is responsible for refurbishing and maintaining city infrastructure such as streets, public spaces and parks, and has to work with very limited data. They do have a registry of all the public infrastructure down to every single park bench and lamp post - however, there is limited data on whether any of the items are working as they should or, indeed, whether they are needed at all or would serve better somewhere else. As with all city data, there is considerable disparity between the neat city registries which the bureaucrats use to keep everything in order, and the actual physical and social reality which can be messier. 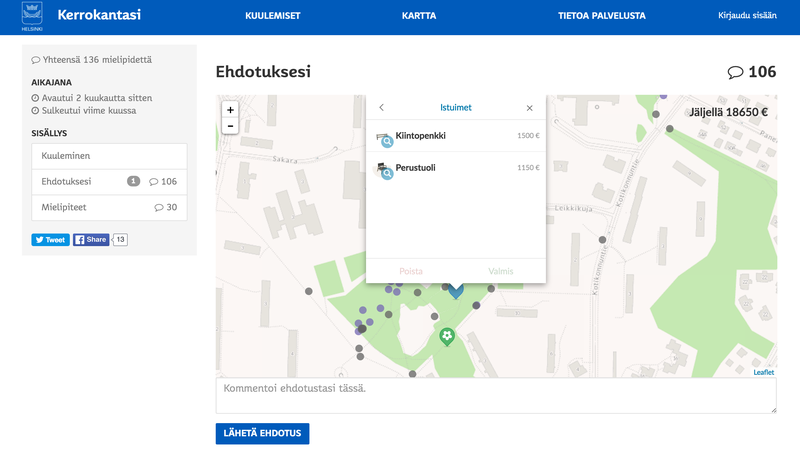 Therefore, building on our new Kerrokantasi platform for gathering comments from local residents, a simple map questionnaire was developed by Jyrki Vanamo of Mapdon, where everybody entering the page was instructed to divide 20 000 euros among park benches, trashcans and plant boxes to be installed anywhere in Kontula, on top of the ones already present there. This means harvesting a veritable bounty of local data that only the local residents possess. In addition, any location could be marked with free commentary on any other issue the Public Works Department should take into account. The latter functionality somewhat parallels the Helsinki Open311 Feedback API, but no general easy-to-use user map interface has been provided by the city thus far.

In comparison to unstructured citizens' commentaries more commonly featured on the Kerrokantasi platform, structured location-based data has the considerable upside that it is easily visualized and analyzed. The Kontula questionnaire gathered a total of 106 different local residents' views on the topic. While the single resident might not get their wishes fulfilled (one answer featured nothing but 20 000 euros worth of flower boxes gracing one particular forest path), once enough data is gathered, clear patterns start to emerge. 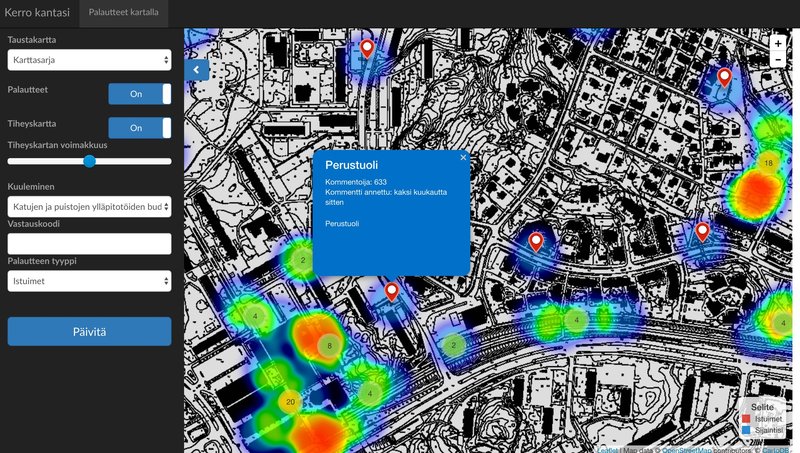 The results of the questionnaire are visualized and clickable on a simple interactive map adapted from the Helsinki City Feedback Hub student project, allowing you to select the type of feedback (everything/bench/flower/trashcan/free comment) and your favorite background map, which will help the city employee to more accurately pinpoint the location in question. In addition to displaying all the feedbacks on map, a heatmap allows at-a-glance visualization of where the most comments of any particular type are located. Clear clusters of needed benches (in Kivikko sports park and Vesalanpuisto), trashcans (in Kivikko sports park) and flower pots (around the Kontula mall) emerged.

Such a simple tool is invaluable in both the budgeting stage, deciding how much money to allocate in different regions and in benches vs. trashcans, but also on the field, as it allows accurate pinpointing of all the feedbacks when you move around the area.

Based on the promising results from the prototype, we are definitely continuing on the track of participatory budgeting. The map questionnaire tool will be improved further, and we will work on harmonizing the data format of structured location-based feedback.

In addition to further local questionnaires, this will allow a citywide platform of continuous participatory budgeting in the future, making sure that citizens' voices are heard in all the regions and all planning stages, not just as a prototype service. As time goes on, this will slowly generate a veritable database of local knowledge throughout the city.

As always, all the source code is available on github.com: